Clad in a nude strapless dress and rocking sun-kissed highlights, Jennifer Aniston dazzled the crowd at Harrods as she showcased her sexy and clean new perfume, dubbed Jennifer Aniston – The Debut Fragrance.

Though months ago, StyleList reported the scent was originally called Lolavie, the name apparently changed at the last minute.

“It’s been a year-and-a-half journey. I’d been asked to do things before, and it never felt organic. But when Leon Falic, president of the Falic Fashion Group, approached me to be involved with the process from inception to fruition, I thought, “This could be a creative expression. And it’s turned out to be an extension of myself as opposed to slapping my name on something,” Aniston told WWD.

We’re eagerly awaiting a whiff of her floral eau once it rolls out in the U.S.!

For more fragrance news, check out which designer is celebrating four decades in the fashion biz by launching a fragrance aptly named Anniversary.

Jennifer Aniston Launches Her Fragrance at Harrods originally appeared on StyleList on Wed, 21 Jul 2010 15:35:00 EST. Please see our terms for use of feeds.

In the latest celebrity news, Jennifer Aniston had her lawyers take out a temporary restraining order Tuesday in Santa Monica against Jason R. Peyton, a stalker who was recently arrested after spending several days trying to find Aniston on Sunset Boulevard.

Lawyers for the television, movie, and fashion star claimed that Peyton was delusional and had Aniston scared for her safety. A statement by Aniston said, “Mr. Peyton has aggressively sought to have personal contact with me and integrate himself into my life.”

He is accused of an increasing pattern of harassing, stalking, and threatening conduct. Peyton, 24, apparently traveled cross-country thinking that he would marry Aniston. He was arrested last week after being found with a “sharp object,” duct tape, and love letters written to Aniston.

The much-anticipated debut of Jennifer Aniston’s first fragrance is scheduled for July 21 at Harrods. The fragrance was created by perfumers at IFF. Aniston wanted the scent to capture many of her favorite sensory memories from her Southern California childhood. Basenotes reports that the fragrance, which WWD previously stated was to be called Lolavie, has top notes of citrus grove and rose water, middle notes of blooming jasmine, violets and Amazon lily and a base of sensual musk, golden amber and sandalwood. The bottle, shown above lower right, was created by David Lipman who also created the campaign including beachside images shot by Mario Sorrenti. The fragrance will be released in three sizes 30ml – £23, 50ml – £29 and 85ml – £36.

Jennifer Anniston joins the legions of celebrities who have launched their own fragrance….and why not, her name alone pretty much guarantees it’s success. I anxiously await is arrival stateside…..I can hardly wait to get a whiff!

PARTNER: Etsy Find: Under-$30 Necklaces That Look Like Family Heirlooms

Don’t have a wealthy grandmother who left you all of her antique jewels? Neither do we. Thanks to Etsy seller Roundabout, now you can grab some of your own pretty necklaces that look like heirlooms–for under $30.

Layer this Large locket ($22) with lots of other delicate little necklaces to get a really cool, effortless look. Fill it with an antique photo of said wealthy grandmother to keep the tale spinning, or wear it  alone.

This Tiny skeleton key necklace ($22) looks salvaged from the antique shop. Feel free to tell anyone who asks that it’s the key to your family fortune.

This tiny Nautical star ($25) is just the right price: while many gold star necklaces are hundreds of dollars, this is truly budget-friendly.

If you’re the non-traditionaly type, go for this sterling silver Tiny pinecone necklace ($23) that adds a little bit of unexpected whimsy to an outfit.

Check out more of our Etsy finds, plus get the best deals from our calendar of online sample sales, and then see our guides to cheap jewelry and necklaces. Looking for more accessories? Try our guides to the best nude shoes, clogs and flat sandals.

LINK LOVE:Etsy Find: Under-$30 Necklaces That Look Like Family Heirlooms

The caption at the bottom of the ad says: “Working out feels great…afterwards, that’s why I drink Smart. It’s hydration I can feel. (And it’s one part of my routine I never sweat.)” Jennifer has been the SmartWater spokesperson since 2007, and if it’s the water making her look this good, I’m in! 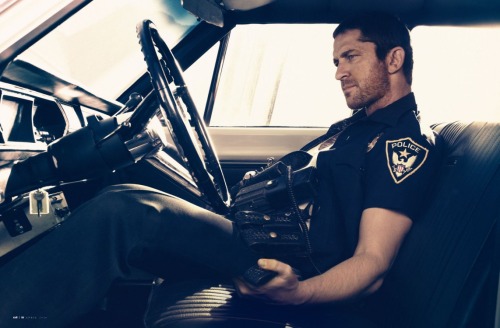 As if the commercials for ‘Bounty Hunter’ aren’t annoying enough, now Jennifer Aniston and Gerard Butler attempt attracting the fashion market by posing for this spread in the April issue of W Magazine. Good job Steven Klein for making them look less like clueless celebrities and more like photoshoped models.

Wish I had such a cool mom…According to Page Six, Demi gave Rumer a pole-dancing lesson at a party at the Chateau Marmont hotel. A partygoer said that the “Striptease” star “even spun around the pole upside down.” Then Rumer gave it a whirl as Ashton Kutcher, Jennifer Aniston and Leonardo DiCaprio cheered her on. “Everyone was cheering, and Leo gave Ashton a high-five.”

Jennifer wears Alberta Ferretti and Lanvin shoes on the much anticipated W April cover with Gerard Butler. Not as sexy as I was hoping, but a great promo for their upcoming movie, The Bounty Hunter.

it’s “the raciest cover that W magazine has ever shot. Far more sexy than the famous Brad and Angelina pictures in bed.” but, “they are definitely not an item,” the source claims.

Jennifer is wearing nothing but sexy silk stockings and lingerie while Gerard is a leather-clad New York City cop in the sexy X-rated pictures that are about to be revealed.