Further Signs of the Apocalypse: Oprah No Longer the World’s Most Powerful Celebrity?

For only the third time in the past seven years, Oprah Winfrey does not top Forbes Celebrity 100 List, their annual measure of entertainment-related earnings, media visibility and social media power. So who had the audacity, the tweet prowess and the f****in’ balls to topple the queen from atop her throne? One word: Gaga.

PARTNER: The Stweets Are Watching

It’s official. Lebron James is going to MIA. Celebs took to stweets to sound off on the matter.

Last night, former Cleveland Cavaliers star Lebron James announced that he would be leaving the Cavaliers to join the Miami Heat. While he was offered a whopping $128 million 6 year deal with the Cavs, James declined in hopes of winning a championship ring alongside basketball stars Dwayne Wade and Chris Bosh; accepting an expected $99 million 5 year deal with the Heat. It seems as though everyone is not exactly happy about this trade; including Cavalier’s owner Dan Gilbert who penned an open letter to all Cavs fans concerning James even claiming that he felt “personally betrayed” by the ballplayer. Aside from that, there has been video footage of Cleveland fans burning Lebron’s jersey. OUCH! Is everyone just taking this trade way too far? Read the full letter below.

Dear Cleveland, All Of Northeast Ohio and Cleveland Cavaliers Supporters Wherever You May Be Tonight.

As you now know, our former hero, who grew up in the very region that he deserted this evening, is no longer a Cleveland Cavalier.

This was announced with a several day, narcissistic, self-promotional build-up culminating with a national TV special of his “decision” unlike anything ever “witnessed” in the history of sports and probably the history of entertainment.

Clearly, this is bitterly disappointing to all of us.

The good news is that the ownership team and the rest of the hard-working, loyal, and driven staff over here at your hometown Cavaliers have not betrayed you nor NEVER will betray you.

There is so much more to tell you about the events of the recent past and our more than exciting future. Over the next several days and weeks, we will be communicating much of that to you.

You simply don’t deserve this kind of cowardly betrayal.

You have given so much and deserve so much more.

In the meantime, I want to make one statement to you tonight:

You can take it to the bank.

If you thought we were motivated before tonight to bring the hardware to Cleveland, I can tell you that this shameful display of selfishness and betrayal by one of our very own has shifted our “motivation” to previously unknown and previously never experienced levels.

Some people think they should go to heaven but NOT have to die to get there.

Sorry, but that’s simply not how it works.

This shocking act of disloyalty from our home grown “chosen one” sends the exact opposite lesson of what we would want our children to learn. And “who” we would want them to grow-up to become.

But the good news is that this heartless and callous action can only serve as the antidote to the so-called “curse” on Cleveland, Ohio.

The self-declared former “King” will be taking the “curse” with him down south. And until he does “right” by Cleveland and Ohio, James (and the town where he plays) will unfortunately own this dreaded spell and bad karma.

Tomorrow is a new and much brighter day….

I PROMISE you that our energy, focus, capital, knowledge and experience will be directed at one thing and one thing only:

DELIVERING YOU the championship you have long deserved and is long overdue….

Ralph Lauren Gets Limited With Lebron

Ralph Lauren Purple Label has teamed up with Lebron James to release this limited edition basketball. Each ball is hand numbered and signed by Lebron James, and retails for $1,000. Now before you start sending me messages telling me how this is a stupid waste of money, the proceeds actually go to a good cause. The money raised from the sale of these will be donated to the Lebron James Family Foundation, which goes towards bettering the lives of thousands. Equipped with a velvet bag, this is the ultimate collectors item.

Month after month Vogue has failed to impress us here at FashionIndie and it turns out were not the only ones. The Queen of Vogue, Miss Anna Wintour has misfired on back-to-back covers this year. First there was the Lebron James/King Kong fiasco that led media outlets to call the magazine racist. Now the sales figures show that the April issue sold well below average, a paltry 350,000 copies-the lowest numbers since the April 2001 cover. But that wasn’t the worst selling cover yet….that belongs to May cover girl Gwyneth Paltrow, the issue only sold 310,000. I guess we weren’t the only ones not interested in seeing her stone-y machine like face.

So the Lebron James Vogue cover with Gisele Bundchen is finally getting the attention of traditional media. We wrote about it last week , saying that what really offended us was the shitty fashion on the cover, and now that we bloggers have been talking about it for a while, the rest of the media people seem to be caring, big surprise.

Anyways after hearing all the opinions and listening to person after person make comments about how “racist” Vogue is I heard one rational thought that made me reassess my opinion.

Would It Be Different If The Cover Featured A White Man Instead of Lebron James?

Suddenly, the voice of Martin Luther King entered my ears speaking words of a day when equality would bring forth truth and I quickly realized that this cover IS NOT RACIST AT ALL!!!

I know, a shocking thought that a media empire run by white folks could actually do something that wasn’t racist in nature is unheard of, but in this case I think Vogue was honestly not trying to offend.

To prove it we had our photoshopping experts reassess the cover and add the photo of a white person. And not just any white person, we used a photo of Stuff White People Like’s Christian Lander. Suddenly the cover isn’t so offensive, but instead a bit comical.

So in the future, when considering racism, we should all ask the question, “Would it still be offensive to white people if a white person was in it?”. Most of the time the answer will be no. Want more proof that Vogue isn’t on a racist trip check out our Ten Reasons Why Vogue Isn’t Racist list…

1. Black as night, Andre Leon Tally may be as fat as a Volkswagon Beetle but the dude still remains Numero 2 at image conscience Vogue. Affirmative action? No, the dude really knows what he’s doing and is one of the most respected names in fashion and at Conde Nast.

2. The whole black man/white woman scenario doesn’t fly when you consider the fact that Gisele is hispanical. That’s right kiddies, this cover is the best example of minority representation by the magazine, ever.

3. Lebron is a basketball player. He’s pictured for doing what he’s known for. What’s wrong with that?

4. If it was a white dude no one would freak out (as pictured above). Can we say double standard? I think we can.

5. No look of fear on Gisele’s face might imply she’s actually having fun. Gasp, whites (hispanicals) and blacks getting along!!! Not possible according to all the haters out there.

6. It’s the Shape Issue people. We need to see some muscle and what better way than showing some serious MUSCLE. Lebron looks like he can run through a wall in this photo and I think that’s the point. The image is of a strong, successful BLACK MAN!!! What’s so racist about that?

7. In fashion black is always in (can’t believe I just wrote that)

8. Comparing Lebron to King Kong is just offensive. I’m sure the people who said this are either a) really, secretly racist themselves since gorilla is the first thing that comes to mind when seeing a black man, b) black and ashamed of themselves, or c) really into monkey sex.

9. Notice how Lebron isn’t complaining. He was there, at the photoshot. I’m sure he had some choice in the photo that would be used. And if I was Lebron, I would choose the photo that made me seem most powerful, like the one Vogue used on the cover.

For those of you that still feel that Vogue is being racist, quit your bitching and take action. You don’t have to buy the magazine, you can demand that more African American’s make it on the cover, and you can bring about positive change. The civil rights leaders of the past didn’t change things by bitchin, they took action.

Just remember that when the day comes that Vogue does properly representing blacks on it’s cover (to me, they’ve already made positive steps) that it is your job as a people to drop your issues of Essence and Jet and get on the Vogue bandwagon. If you don’t, well, then you’re just haters.

Which reminds me, why isn’t anyone complaining about Essence and Jet and the dozens of other black centric magazines? Last time I checked Whites, Hispanicals, Asians, and just about every other race except for African-American’s haven’t gotten much cover play on those glossies?

It’s about time that everyone takes a chill pill, gets off their civil rights high horse, and make a decision that not everything “white” media dishes out is offensive to black people.

Of course there are some exceptions….

We Are Witness : Vogue Sells It’s Soul to the NBA 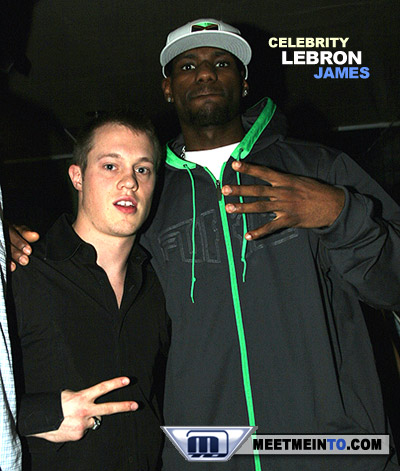 The NY Post reported today that Miss Wintour spent the night courtside with at the Knicks game. No she wasn’t meeting with fellow devil boss, Isiah Thomas, she was courting the very bankable (also see over-exposed) Lebron James for an upcoming photo shoot with Giselle Bundchen. I’m sorry, did I miss something? While I have come to expect Vogue to compete with US Weekly on the regular by overdoing the celebrity thing a few times too many, I didn’t realize they we’re heading into Sports Illustrated territory just yet.

This is just another sign that Vogue has completely lost touch with it’s core values. I’m sure the issue will be filled with the type of advertisers that would be attracted to a big name like Lebron James (Nike, Escalade, Jacob the Jeweler), which will most likely garner Miss Wintour another great year end bonus, but do we really have to accept the Cavalier as a fashion icon?