Some Responses from Benjamin Kanarek Blog

I was rather impressed by several of the comments made on forums to my original article and decided to ask permission if I could re-post those comments here.  The original article Sex in Fashion Drives Audiences is here. I have not corrected the comments except for the layout which made it easier to read to my eye.

Well, as a dude who keeps a blog which some people refer to as “Fashion-pornography,” I figure I’d leave my two cents here.  I’ll be the first person to admit that I love sex in fashion.  Then again, I do also acknowledge the idea that less can be more as pertains to the subject.  And I enjoyed your remark relating this topic to foreplay.  The photographer should simply give the viewer a taste — leave a little mystery.

I believe that sometimes what you know or what is somehow implied can make a photo or a set of photos that much more erotic or provocative.  That in itself is sometimes leeway for work to be perceived much differently.  Take, for example, one of Monika Jagaciak’s first big editorials.  “Beach” by Chuando & Frey was shot when the model was a relative unknown at age 14.  In my opinion, the difference between knowing this information and not makes a huge difference in viewing the story.  You can very well be uninformed looking at these pictures, thinking thoughts that you would for any other fashion spread alike.

Now, for the informed, this may quickly transform itself.  You may deny yourself the same feelings or thoughts based on your ethics, beliefs, etc.  We’re all human though.  There’s no denying some things.  I feel like people do stuff like this for many reasons, one being to get a rise out of others by pushing the boundaries.  Personally, I can appreciate that.  In summary, I think that in order for sex in fashion not to get stale, two things need to happen.  The creators should remain as eclectic as possible and the viewers should be informed (or not) and imaginative.

hi ben, thanks for writing a thought provoking note.  i too read your blog and it always leaves me thinking more about what i do.  in our quest for creativity, different lighting, and style, bringing a more cerebral approach to what we do is like a fresh breeze.

having lived in ohio all my life, and with strong ties to the city of columbus, its hard to not know about les wexner, founder of The Limited and the person who bought Abercrombie and Fitch and took it to the heights it reached until he sold it in 1996.  the A&F advertising and its emphasis on sensuality was one of the keys to its success.  i have a friend in the creative department and they always look for the best looking models that have a certain look to them (no secret there) and can turn on the sexy that is conveyed in the images.  wexner was the one who chose bruce weber as their photographer, and their catalog was collected by every suburban kid who thought that buying A&F would put them in the same situations shown in the pictures.

i think you are right that different waves or trends will emerge in advertising fashion and clothing, but the bottom line will always be sex, and the successful campaign (and resultant sales of the product) will always be hinged on how the viewer identifies with themselves and the models.  once that connection is made and the viewer becomes a buyer, the equation is complete.

i did a shoot recently of propane products.  i know, not fashion, but fashion photography in toledo isn’t exactly rampant.  anyway, the client wanted a male model shown using lawn care equipment…mowers, weed wackers, etc., and so i showed them a few models i had.  they were all too pretty said the client, and then he saw a print of a friend of mine who has blond short hair, square cut jaw, intense blue eyes, and is not a model but a contractor.  they wanted him because he has a rugged and masculine sex appeal.  sex appeal for propane products?  yeah…sex is everywhere…

I gotta agree with you. It seems that every fashion editorial has at least one tit exposed, and in many cases much more than that. I’m nowhere near to being a prude, and for a while I fell for the belief that this kind of thing was edgy. Now, I still love an exposed tit and more, but when every fashion story is doing the same thing it just starts to become trite.

E.g. I saw a recent fashion story in which a renowned photographer shot the model naked but for a purse and shoes and such in some worn-out royal palace and church. He shot it Juergen Teller style, i.e. slightly overexposed front flash, washed out colors. The pictures are great, and the style suits the subject. It was a perfect execution, I thought, except I found the concept to be coy, like it’s supposed to be pushing the envelope, but that envelope has been pushed years ago so it just came off as an empty provocation.

Thanks for the comments and if there are any other comments feel free to send them to us: info@benjaminkanarekblog.com

Sex in Fashion Drives Audiences…But Where?

I have no problem with this what so ever.  If the theme and story line screams for something hot than why not. But what I am finding more and more is that the shock factor is being used more and more just to shake things up and drive audiences in their direction.  Now I am not prude, but what happens when the public becomes numb to the notion?  What will we have to pull out of our magical hats to get people to look at the magazines.  Will there be a backlash to a more romantic notion of sexuality, or will the marketplace be an eclectic mix of many social and artistic idioms.

I tend to think that modes flow like waves and even though there is room for a vast variety of artistic approaches and interpretations, the overall wave has an affect on all other interpretations and do influence them to a lesser or greater degree.

If your story screams for sexuality, go ahead have a ball, but always consider the flow of your story and treat it like you do your sexual affairs.  Foreplay is often more important than the actual orgasm.

Just be aware that the audience is very fickle and can easily become numb to being over amped and might just turn the page faster than desired and as a result might go elsewhere.  Why? Just because…If everyone is wearing black, introduce white. Contrasts, contrasts, contrasts…

The Politics of Fashion Photography Part 13

The Model Agency and How they Can Affect Your Success

So, you think you have arrived.  You have been asked to shoot for one of the few Biggies.  You have the support of the magazine infrastructure and you are ready to cast that Top Model for your shoot that will catapult you to the top of heap. END_OF_DOCUMENT_TOKEN_TO_BE_REPLACED

Ryan Kwanten heats up the launch issue of Australian GQ Style!!! Hitting newsstands every September and March, the magazine is an addition to the popular bi-monthly magazine, focusing on seasonal trends in men’s fashion. Here’s what the 33-year-old True Blood actor had to share: On what he likes…
END_OF_DOCUMENT_TOKEN_TO_BE_REPLACED

END_OF_DOCUMENT_TOKEN_TO_BE_REPLACED 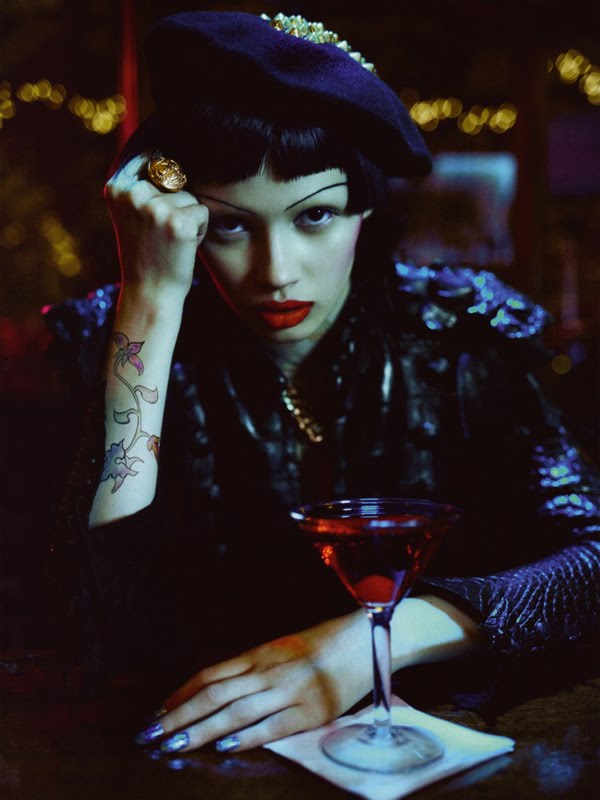 END_OF_DOCUMENT_TOKEN_TO_BE_REPLACED

Lindsay Lohan is the new cover girl for GQ Germany… Its a much softer, sexier, non-jailbird version of Lindsay.. Her bikini matches the F@%& YOU nail polish she wore for her court hearing..Good Luck LiLo

END_OF_DOCUMENT_TOKEN_TO_BE_REPLACED

YVY Mag presents the launch of new fantastic title – CLIENT Magazine. A 150-page b/w print magazine about lads, men and menswear. Available in London, Milan, New York, Paris and Vienna. Every story in every issue shot specially – no submissions allowed. It is a truly unconventional magazine about male models, fashion and a little bit of sleaze. Cover model for the debut issue unveiled today on models.com.

Client will not be available to view on-line for free, but a full download version will be on sale through a digital news stand.

END_OF_DOCUMENT_TOKEN_TO_BE_REPLACED

A little lazy romance on this oddly rainy LA summer day. Hope it’s much nicer wherever you are.

p.s. do you think Kate cooks? She looks good in the kitchen, just saying.

Editorial continued after the jump…

END_OF_DOCUMENT_TOKEN_TO_BE_REPLACED

Vogue’s July issue features coverage of the The Costume Institute’s Ball, of which Oprah is co-chair. The article opens with a two-page spread of Oprah and Gaga, featured here, as photographed by Mario Testino. Sadly, this scan is doing this two-page spread no justice. And not for nothing but Oprah’s makeup (by Derrick Rutledge) and boobs (from good eating?)are amaaaaazing! She’s wearing Oscar de la Renta and Lady Gaga is wearing Prada. Via Gagalicious.